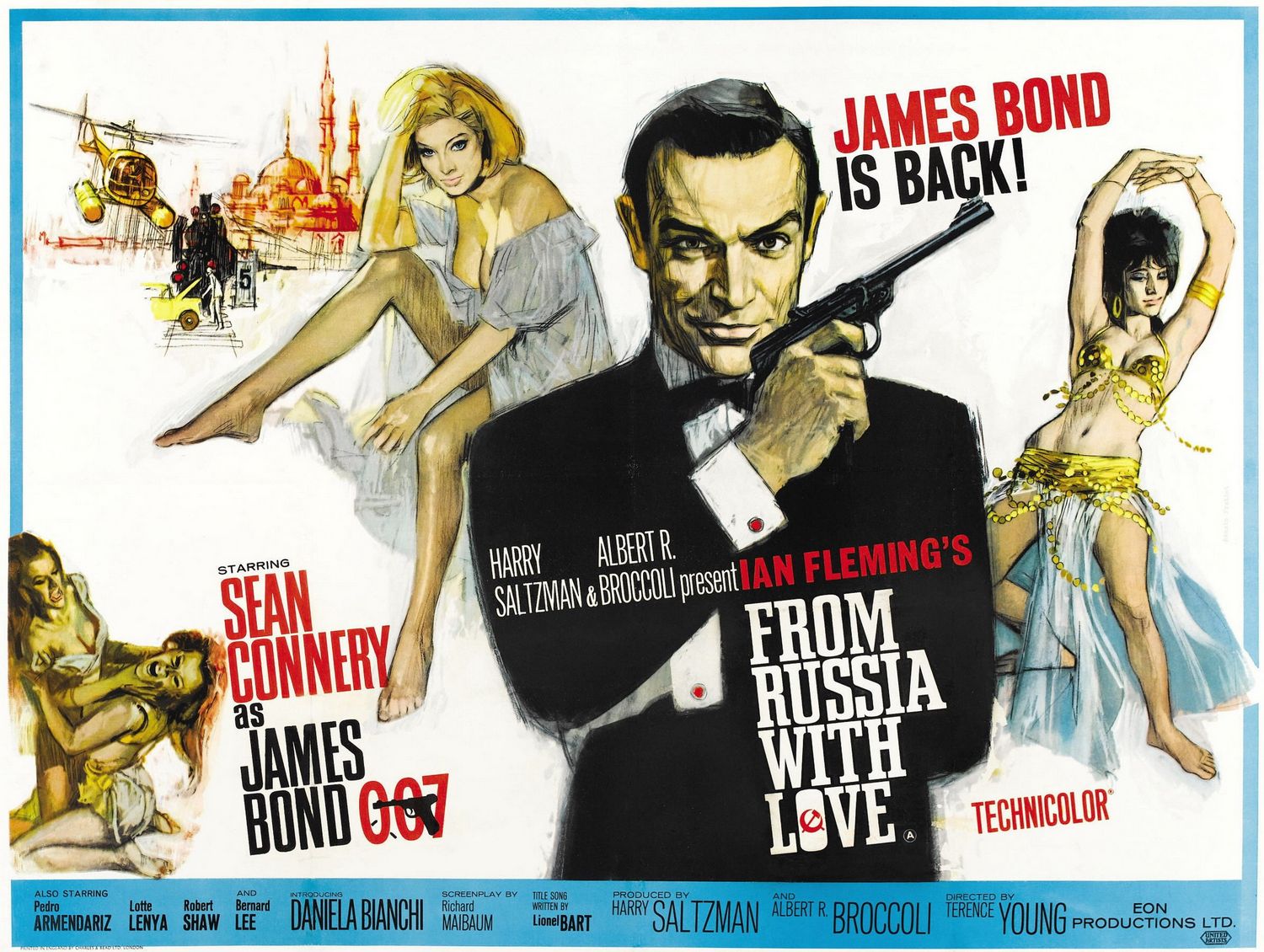 Bond was off to a great start with Dr.No, so it was soon time to deliver the next chapter in the story. Making a successful sequel is no easy task – musicians often struggle with their second ‘sophomore’ album and the same goes for filmmaking. Think of the number of sequels you’ve seen that are well-made and entertaining, but lack depth because they’re no longer telling us an origin story. In the superhero genre, nearly every sequel chooses the “things get difficult for superhero” story, because there isn’t really any other option. The first film tells us how the character starts out and usually goes out on a massive high, so the only real choice is for things to get worse before they get better.

Fortunately, the more episodic Bond format makes things easier. Continuity and long-running story arcs have never really been a feature of the films – we’ve come to expect that a reset button gets pressed on the character at the start of every film. Which is fine of course because Bond is about pure escapism.

The film was well received when it launched in October 1963. Word of Bond must have spread fast because the film doubled the box-office takings of Dr. No from the previous year, and was the most popular film of the year in the UK. Reviewers noted that the film was certainly tongue-in-cheek but expertly handled by director Terence Young.

Is it good to watch today?

FRWL plays it fairly safe with a similar mix of espionage and international filming locations to Dr. No, but it does feel somewhat less ambitious and imaginative. The story starts when MI6 is presented with the opportunity to obtain a Soviet Lektor decoder, and deciding that although it’s obviously a trap, it’s worth playing along. The interplay between M and 007 in these scenes is excellent, with Sean Connery managing to be smug yet respectful at the same time. Desmond Llewellyn makes his debut in this film in the much-loved Q role that would last over 35 years. He gives Bond a new suitcase which is delightfully full of concealed gadgets like a gun, a knife and a tear gas bomb.

Most of the film takes place in Turkey, with fascinating street footage of 1960s Istanbul. Bond’s sidekick Kerim Bey – a sort-of Turkish Felix Leiter – is an excellent character and very likeable. Sadly he was terminally ill and died while the film was in production. The film is free of any of the slightly racist overtones of Dr. No, although it’s still too soon in the series for first-class female characters. The Bond girl (a Russian agent called Tatiana Romanova) feels awkwardly handled at times. Don’t get me wrong, Daniela Bianchi is beautiful and does a decent job of playing a Russian agent (she’s actually Italian). But the introduction between herself and Bond is an unconvincing sex-at-first-sight scene, without even a glass of Bollinger ’58 to break the ice. Maybe it’s supposed to work because we know that both parties are fully aware of the deception.

There’s some dry humour involving a secret exit from a building being in an amusing location on a massive billboard. Compared to the slapstick jokes of later Roger Moore films, this is much better judged and raises a smile without any sense of the ridiculous.

Personally, I didn’t like From Russia With Love as much as other Connery era films such as Dr. No, Goldfinger or You Only Live Twice. The idea of a slower, less action-packed film is fine with me but I’m not sure the writing and characters quite measure up to this approach. Major stunt sequences such as the helicopter attack and the boat battle feel out of place, as if they were added to address niggling concerns about a lack of excitement.

After re-reading reviews and other opinion off the film, and finding that it’s the favourite Bond movie of Sean Connery, Timothy Dalton, and Daniel Craig, I am not completely certain of my opinion on this film and will give it another go at some point in the future.

As you might expect from a film only a year younger than Dr. No, the presentation is very similar. It’s excellent, with nothing to complain about. Aspect ratio is the same at around 1.66:1. There is film grain present throughout, but it looks great to my eyes and only adds to the atmosphere. Sound is fine too, with good effects and nice clear dialog.

From Russia with Love is a solid entry in the Bond series, and while it doesn’t have the freshness of its predecessor or the amped-up entertainment of its successor Goldfinger, it’s still much better than the low points of the series that were yet to come.

Old Gamer is the ramblings of me – an old gamer. Will I remain a gamer or will my frustrations with modern games push me away?